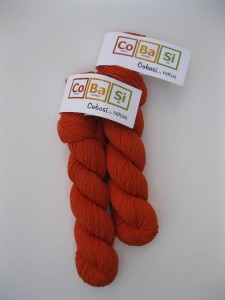 Happy New Year and welcome to the first Progressive Needles Knit Along of 2013!  I have been twitching with excitement to share Crimple with you.  This toe up pattern features some of my favorite design elements to create a beautiful sock with a superior fit.  The design is further enhanced by the lovely Cobasi yarn that provides great stitch definition and durability without wool.  Whether you are a novice or a long-time sock knitter, I think you find Crimple to be a delightful knit!

Crimple begins with a patterned toe because why shouldn’t the toe be just as interesting as the rest of the sock?   Most socks begin with a plain stockinette toe that is followed by the instep design.  Crimple’s toe pattern sets the stage for the instep design to flow up from the tip of your toes.  The toe begins as usual with Judy’s Magic Cast On followed by one round of all knit stitches.  Then the fun begins!  As you increase for the toe, the first half of the round will be worked in a rib pattern to create the instep (top of the toe).  The second half of the round will remain in stockinette (all knit) for the sole (bottom of the foot).  I have written out each round for you to make the toe easy to follow.  (Perfect for novices!)  In the instructions, the first line of each round will be the instep and the second line is the sole.  I recommend placing a sticky note under each line as you are working it to help stay on track.  After a few rounds the pattern will emerge on the top of the toe and you will cruise along to its completion.

If you have any questions or concerns, please don’t hesitate to ask them here or in the Knit Purl Hunter group on Ravelry.  I monitor both sites daily to help you every step of the way.  I will post a picture of the toe with next week’s clue.  If you can’t wait until then, many knitters post their photos in the Ravelry group for others to enjoy.  Until next week, happy toes and happy knitting!

kfb – knit into front and back of stitch.  See kfb Video

Cast On – ALL Sizes

Using two needles, cast on 24 stitches using Judy’s Magic Cast On with 12 stitches on each needle.

Knit second 12 stitches through the back loop.

Continue with Toe Pattern in appropriate size (below).

(Note to double point needle knitters: I find it best to rearrange stitches at this point.  Place first 12 stitches on needle #1 for instep (top of the toe), 6 stitches each on needle #2 and needle #3 for sole.)

Work Rounds 1-20 as above for Small and Medium Toe.  Continue with Rounds 21-24.  At the completion of the toe, there will be 72 stitches.

STOP!  Next week’s clue will add a beautiful instep design to complement the toe.  Happy knitting!