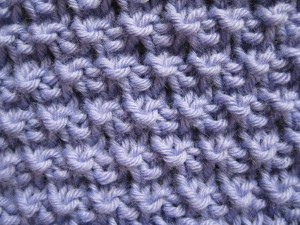 With the lovely garter slip stitch completed (pictured above), we will end our shawlette with a textured bind off.  The Picot Bind Off is a delightful technique that adds texture and interest to any garment.  This bind off uses much more yardage than the standard bind off.  Be prepared for this should you choose to substitute this bind off in your next project.

The Picot Bind Off achieves its texture by casting on extra stitches and binding them off at regular intervals.  The stitches are cast on using the Cable Cast On method.  The Cable Cast On is often used to cast on stitches within a garment.  Buttonholes would be one example of a great place to use this handy cast on.  I recommend watching the “Cable Cast On” Video for an up close look at this technique.  When executing the Cable Cast On, pay close attention to the manner in which the new stitch is placed on the left hand needle.  In the video, the stitch is placed untwisted on the needle.  This slight attention to detail will result in a plumper picot.  One of my test knitters reported that her picots were more of a “flop” until she seated her cable cast on stitches as demonstrated.

Once Triplicity is off the needles it is time to block.  Blocking is an often-neglected step that has so many benefits.  Think of it this way, you would never cart around a shirt in various bags for several weeks as you mend it and then just pop it on and expect it to look its best.  The same thing is true for knitting.  Take the bit of extra time to showcase your beautifully knit garment.

Triplicity’s texture stitches are all based in garter stitch.  Because of this, the shawlette lies nearly flat and requires minimal blocking.  However, blocking did allow me to stretch the shawlette to a larger dimension, even the tension and smooth the picot edges.  Blocking also allowed the yarn to bloom and plump to its lovely potential.  I gave Triplicity a little bath in cold water and then pinned it to the desired dimensions.  I did not find it necessary to pin each of the picots found in the bind off – a simple smoothing with my fingertips was all it needed.  Once dried, my shawlette had an improved appearance and a larger size coupled with a superior drape.  Give your work the professional touch with blocking – learn how with the “Blocking” Video.

Return here tomorrow and I will post pictures of the completed Triplicity!

If you have one, you probably won’t need it.

If you forget one, you will wish you had it!

Join us November 3rd for Repeat Performance as the KAL continues.  We continue our focus on texture stitches while knitting socks two at a time from the toe up.  There are plenty of videos, techniques and stitches in store for you!

Repeat Performance is knit with Royal by Austermann.  The pattern uses 2 50g/215yard skeins of this scrumptious, solid-colored yarn.  A gauge of 8.5 stitches per inch in stockinette is recommended on US#1 (2.5mm) 40” circular needles or size needed to obtain gauge.  NOTE: Pattern may also be knit two at a time on two circular needles or one at a time on double points.