Welcome to the fall installment of the Progressive Needles Knit Along.  I’m excited to get back to sock knitting with you, especially one with so many great techniques and new videos!  As always, continued praise for our sponsor, Skacel Collection, whose support makes these KALs possible.

Before we begin, here is an overview of the KAL:

When designing socks, sometimes the stitch pattern determines which yarn I will choose.  At other times, it is the yarn that is driving the stitch selection.  For Cableship, I knew that I wanted to design a sock using Zauberball yarn.  The deeply intense, gradient yarn has long been a favorite of mine.  I just knew I had to come up with a pattern that would do justice to this lovely yarn.  The answer?  Cables!  No matter which shade of Zauberball you chose, it will showcase the strong cable design.  As the colors flow, so will your stately cables!

Zauberball is a single ply yarn with a different “feel” than other plied yarns.  I firmly believe that every knitter and yarn have a get-acquainted period before reaching the zen moment when the stitches and yarn start to fly.  Every worthy yarn deserves a courtship, so enjoy getting to know this colorful beauty.  Because of the long color runs in Zauberball it is likely that you will not have identically striped socks.  I embrace this departure from the ordinary!

The pattern is written for one at a time sock knitting.  If you are a die hard two at a time knitter, wind off half of the skein into a second ball.  If you want the yarns to stripe in the same color sequence, the second ball of yarn must be rewound to run in the same direction as the original skein.

Gauge is very important when knitting any sock.  I have knit hundreds of socks and my experience tells me that a 64 stitch sock on #1 (2.5mm) needles is the formula for me so that is where I started.  Oh, how I hate to be wrong!  My first attempt at Cableship was with a #1 needle and too snug.  I knit the same sock on #2 (2.75mm) needles and the sizing is now perfect for me.  In the photo below, the blue sock on top was knit with #1’s and the lower green sock was knit with #2’s.  It’s amazing the difference made by a quarter of a millimeter! 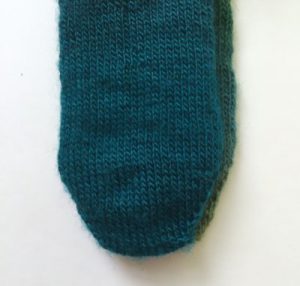 I share my experience with you as a caution to the veterans who will jump in with their usual size needle.  Cableship is a bit firmer of a sock due to the cables, but it will also incorporate a rib based pattern to make it more forgiving.  If you have a go-to needle size, you may want to use one size larger.  For the diligent knitters who swatched, life is good and proceed with the needle determined by your gauge.

I think it is best to determine the size sock to knit by the circumference of your leg.  Measure about 4″ inches above the ankle and use this measurement to determine the best size option for you.  You can knit the foot to any length and the leg is knit to 6″ or shorter.  The medium size is the dreaded average women’s sock:)

Cableship is a toe up sock that begins with Judy’s Magic Cast On (JMCO).  My video is the most-watched tutorial of JMCO on Youtube.  I feel a bit sheepish about this since my video equipment has vastly improved since its debut.  This prompted me to film a new JMCO video in HD with clearer pictures and sound.  It includes the same instructions plus a few extra tips.  One of the tips is to work the toe increases using the make one stitch (which I use in Cableship) instead of a kfb.  Watch my new version and let me know what you think!

Once the toe is complete, begin the foot design over the first half of the stitches following the written or charted instructions.  The foot design is fairly simple once established because you will always knit the knit stitches and purl the purl stitches in between the cables.  It makes for fast knitting!   Take care to knit from the correct size instructions.  When using the charts, I like to color code the cable symbols for fast reading.  Below is pictured my color coding for the medium size. 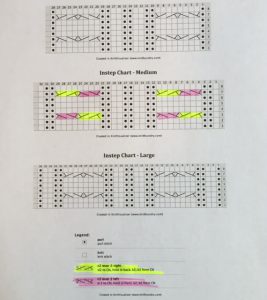 Continue knitting the cable design over the foot until it measure 2″ less than the desired length ending after Round 4.  For example, if your actual foot is 9″ long then knit the sock to 7″.  (The heel will add the extra 2″ needed.)  If you are knitting with the magic loop or two circs, try the sock on your foot and assess the length from that vantage point.

Cableship’s foot is seen here below and ready for the heel.  Did I mention that we will be knitting a heel new to the series?  I can’t wait to share it with you!!!! 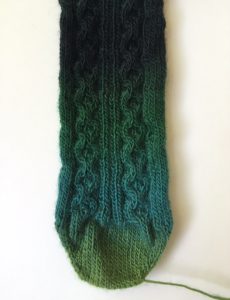 M1L (Make One Left) – With left needle tip, lift strand between needles from front to back. Knit the lifted strand through the back. See Make One Video

M1R (Make One Right) – With left needle tip, lift strand between needles from back to front. Knit the lifted strand through the front. See Make One Video

Directions are for Small (Medium, Large in parentheses when necessary).

Using two needles, cast on 24 stitches using Judy’s Magic Cast On with 12 stitches on each needle.

If using one or two circular needle knitting method, increases are made at the beginning and end of each needle as follows:

Round 2. Knit all stitches.

Round 2. Knit all stitches.

Work appropriate size over instep stitches from written instructions (below) or from Instep Chart (following). Knit all sole stitches.

Continue knitting in pattern until foot measures 2” less than desired length of foot ending after Round 4.

(Example, if your actual foot measures 9” then knit sock to 7”.) 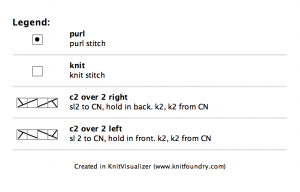